Monarch of the Forest

Copying how the grown-up stags prance around, his friendship with Thumper and Flower, flowers, butterflies, snow, Faline

Ice-skating, his mother's death, forest fires, hunters, his father's stubbornness, Ronno being rude to him and Faline, Faline being in danger

To protect the forest from Man

To earn his Father's approval (sequel)

Ronno, Man and his dogs

The Great Prince of the Forest (father)

Geno and Gurri (son and daughter)

Bambi is the protagonist of Disney's 1942 animated feature film of the same name. A deer living in a forest, he is best

friends with Thumper (a rabbit) and Flower (a skunk). However, he was closest to his mother, who was shot on his first winter. Raised into a buck by his father, he strongly falls in love with his childhood sweetheart and love interest, Faline, and they end up, later on, having twin fawns, a son and daughter named Geno and Gurri, respectively.

Bambi originated as the main character in Felix Salten's Bambi, a Life in the Woods. He has made cameos in several Disney cartoons. In the Disney films, his species was changed from the roe deer to the white-tailed deer, which would be more familiar to American audiences. His image is a Disney icon comparable in recognition factors to Mickey Mouse, and he is even shown on Disney stock certificates. 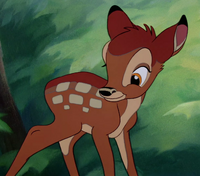 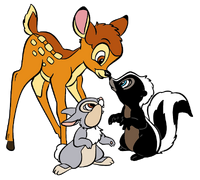 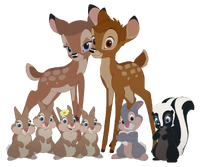 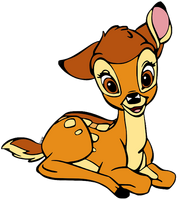 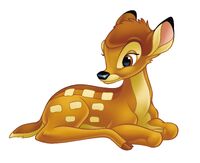 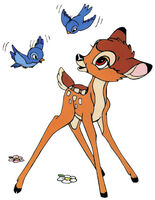 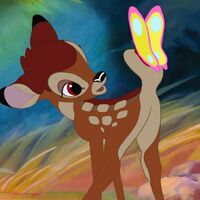 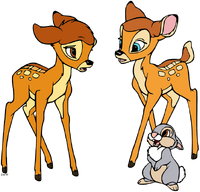 Add a photo to this gallery
Retrieved from "https://charactercommunity.fandom.com/wiki/Bambi?oldid=49203"
Community content is available under CC-BY-SA unless otherwise noted.