"On a scale of one to ten, how would you rate your pain?

Baymax is the deuteragonist of Disney's 2014 animated feature film, Big Hero 6. He is an inflatable robot

created by Tadashi Hamada to serve as a personal healthcare companion. Following Tadashi's death, Baymax was inherited by Hiro Hamada, with whom he became a member of the superhero team known as Big Hero 6.

He is based on the Marvel character of the same name from the Marvel Comics Series, Big Hero 6. 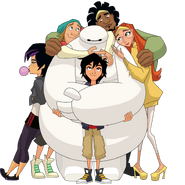 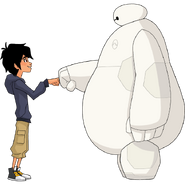 Add a photo to this gallery
Retrieved from "https://charactercommunity.fandom.com/wiki/Baymax?oldid=21251"
Community content is available under CC-BY-SA unless otherwise noted.