Flirting with Woody, her friends, playing with her sheep, adventure, chatting with Giggle, being played with, fixing Woody's hat and badge

"Oh Woody, if only you could see how much Andy misses you."

"Who needs a kids room when you can have all of this.""I'm not Andy's toy."

deutaragonist in Toy Story 4.  She is a porcelain shepherdess

figurine and Sheriff Woody's girlfriend in the films. Bo Peep and her sheep were originally adornments of Molly's bedside lamp.

She is inspired by the character of the classic children's nursery rhyme Little Bo-Peep. Bo is sometimes considered to be "Andy's toy" because Andy likes to make her the damsel in distress of his plays. Bo is the romantic interest (later girlfriend) of Woody, providing a calm and loving comfort whenever he is overwhelmed. She is noted for using her shepherdess crook to hook her cowboy and bring him closer in a romantic way. In private, she is a great deal more daring with her words and actions, which Woody seems to be quite fond of. In Toy Story 4, her origins are slightly explained by Woody to Giggle McDimples. She and her sheep were bought along with the lamp not too long after Molly was born, due to the baby being scared of the dark, which "broke every toy's heart", according to Woody. The lamp comforted Molly and she would often have her hand lay on Bo's feet.

Bo Peep is a very romantic and levelheaded toy. She has strong feelings for Woody, which causes her (along with Slinky) to give him the benefit of the doubt when he allegedly murders Buzz Lightyear, whom she clearly considers attractive as well, and consistently whispers to the wall her worries about where Woody could be. Despite this, she still behaves like a free spirit. She only believes what she has witnessed for herself, such as when she looks into Lenny's visor and sees Buzz riding behind Woody aboard RC, while the rest of the toys immediately take her word for it. By the time she is moved to Molly's room, she becomes more of a leader amongst her toys as she is described by Woody to be the most capable of easing Molly's cries at night which often caused great dismay to everyone.

Since she parted ways with Andy, Bo has taken on a different point of view in life. As a lost toy, she never worries about being loved by a child and is open to see the world.

Many fans were disappointed that she was excluded from the main events of Toy Story 3, despite appearing on a teaser poster. Bo Peep's shrinking role in the series after the first film is explained in The Art of Toy Story 3. 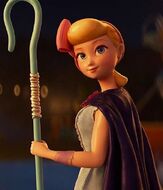 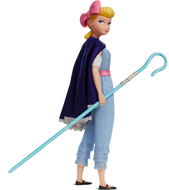 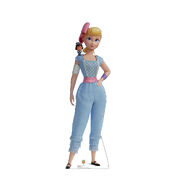 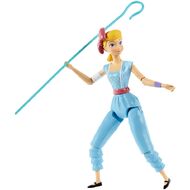 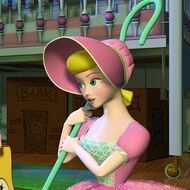 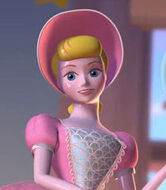 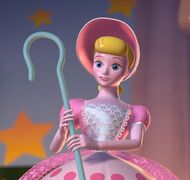 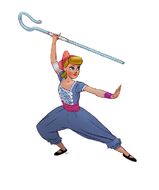 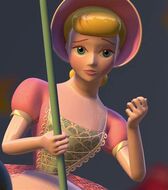 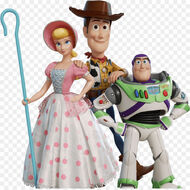 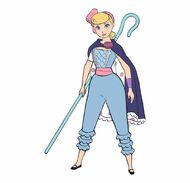