Yodeling, being loved by a child, tickling toys, having fun with Woody and the rest of Andy's toys, Woody's Roundup, her friends

Being in storage (which makes her claustrophobic), not having someone to love her, being forgotten, toys having owners (formerly), Andy (formerly), Stinky Pete's betrayal, being framed

To be loved by her owner

Becomes the new leader of the toys after Woody leaves

Jessie the Yodeling Cowgirl (or better simply known as Jessie), is the tritagonist in Toy Story 2. She is

also a major character in other appearances of the Toy Story series.

Jessie is a friendly, excitable cowgirl doll. She likes being loved by any child and has the power to yodel. She hates being in storage ― as it makes her claustrophobic ― and not having someone to love her. A girl named Emily had once loved her until she gave her up and put her in a charity box, which emotionally scarred Jessie forever.

Like Woody, Jessie is a lanky cowgirl rag doll. She has red hair braided with a yellow bow, green eyes, and matching felt hat with white lace. Her outfits consist of a white long-sleeved western-style shirt with both yellow blouse and cuffs that have red doodles, blue jeans, a belt made from brown plastic with a buckle made from gold plastic, white chaps that have cow spots all over, cowgirl boots made from brown plastic, and a pull string on her back with a white loop attached to it. 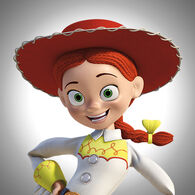 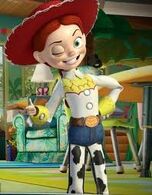 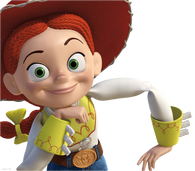 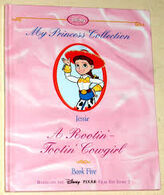 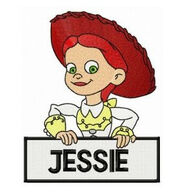 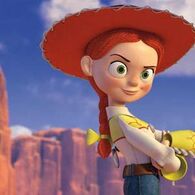 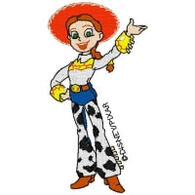 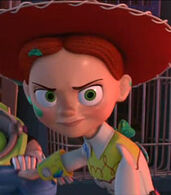 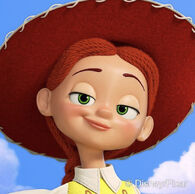 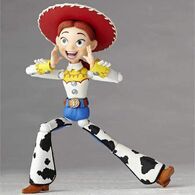 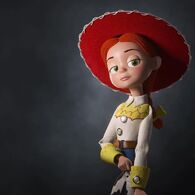 Retrieved from "https://charactercommunity.fandom.com/wiki/Jessie?oldid=47444"
Community content is available under CC-BY-SA unless otherwise noted.